Yvette Cooper MP joined local residents and school children in Altofts in November to hear their concerns over the proposed extension of Rudd Quarry.

Momentum was building among Altofts residents ahead of the 8th November Wakefield District Council Planning Committee meeting that decided upon the Quarry’s future.

The concerns of residents range from increased problems of dust, mud and traffic and further concerns over an extended quarry’s effect on flooding. The extended quarry site would have been in close proximity to many homes along with the Altofts Junior School.

Whilst the campaign was taking place, the local MP visited the school, the local MP heard from the children across the school who have been writing letters to the Planning Committee.

Ewan from Year 3 said: “In the summer it will get really hot in our classrooms and we won’t be able to open the windows as the dust will get in our eyes”

After the successful outcome in the Planning Committee Yvette Cooper MP said: “These residents and these impressive young voices had real concerns and I think it would have been really unfair on the school, the children and the residents in the area. I believe that the problems this application would have caused for the local community would have far outweighed any economic benefits to the company and I am urged the Council to turn it down.”

"It is great news that the planning committee has listened to our concerns about Rudd Quarry and rejected the proposed extension. I submitted a strong objection as I was extremely concerned about the local impact given how close it would come to the school and nearby homes. Local residents made a powerful case and I’m glad Wakefield Council was persuaded." 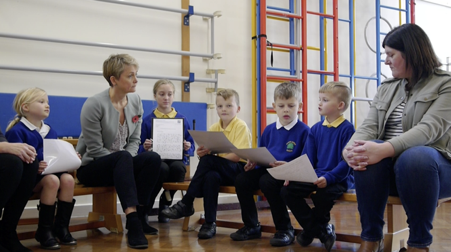